The classic appearance of a PE is that you have a raggedy lung perfusion (Tc-MAA can't get into certain areas) and a pristine lung perfusion with Technegas.

It only gets hard when both the lung images are moth-eaten. Then you have to decide which is more moth-eaten.

The PIOPED criteria are:
To label someone as HIGH probability they have to have 2 big (>75% of the segment) unmatched defects (or 4 moderate ones) and - this being the kicker - a NORMAL CXR in that region (i.e. defects are unmatched on ventilation and on CXR).

To be LOW probability they have to have:-
- an infinite number of matched defects with the CXR normal at those sites
- triple match (V abnormal, Q abnormal, CXR abnormal) in the upper and middle lobes
- match in the lower lobes with a large pleural effusion
- non-segmental defects (e.g., aortic impression, hila, cardiomegaly)
- any perfusion defect where there is a larger CXR abnormality in that region
- STRIPE SIGN (defect surrounded by normally perfused lung)
- an infinite number of small unmatched perfusion defects but a normal CXR at those sites

To be VERY LOW probability they have to have up to 3 small (<25% of the segment) perfusion defects but in those areas the CXR is normal and the ventilation is normal.


A pitfall to be aware of is that when you have a pneumothorax or pleural effusion, that whole lung looks underperfused and underventilated, meaning that you might mistake it for a large PE to that side.

If they've forgotten to label which is ventilation and which is perfusion, then you just look to see which has tracer in the trachea - that's the ventilation image!

Other things to know about VQ scans:
Uses Tc-labelled albumin microspheres. Therefore not given in pulmonary HTN unless you are giving less than 200,000 particles. Not given with right-left shunts.

If it is given inadvertantly with a r-l shunt then you will see: 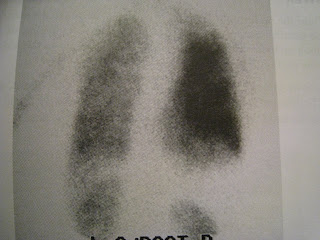 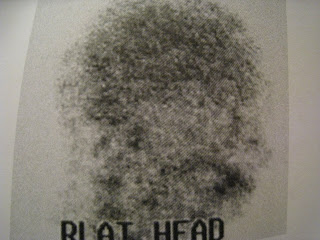 Here is a way to remember the lung segments: 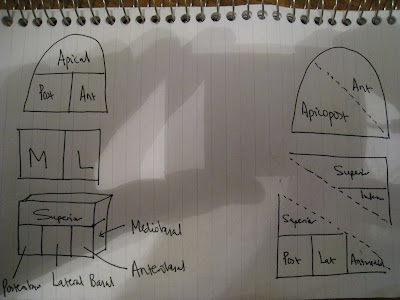 The L(eft) lung has lobes that look like L's.
Thus, the lingula, because it cannot be a square, has superior and inferior segments.
And the LLL, because it too looks like a triangle, has a base and a superior segment.
Finally, because there are 2 lobes in the left lung, the upper lobe has 2 segments with the demarcating line (-------), like it is for the other lobes, being oblique. 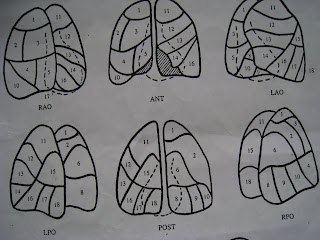 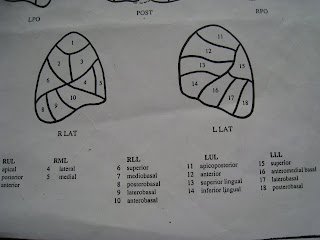 The report is written thus:

The best conclusion is to say: "No evidence for pulmonary emboli (instead of saying "low probability"). The changes in the x lobe are most consistent with bronchopulmonary disease".
Posted by u at 4:15 AM